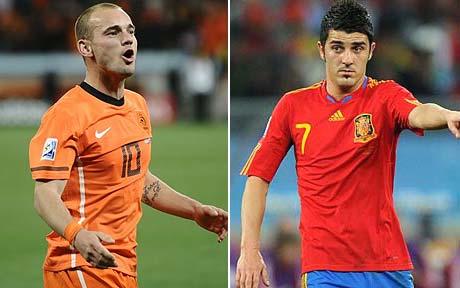 Iker Casillas: Remains one of the world's best goalkeepers with his sound handling, positioning, decision-making and, above all, his confidence. 9

Sergio Ramos: Enjoyed a terrific tournament marauding up that right flank to join in with attacks, thereby providing the team with some much-needed width. 8

Gerard Pique: Quickly developing into a world class centre-half with his aerial aggression and composure on the deck. Sir Alex Ferguson must rue the day he left Old Trafford. 8

Carles Puyol: If we're talking competitors, there aren't many better, for Puyol somehow maintains his tremendous drive. His partnership with Pique looks balanced as well. 9

Joan Capdevila: A steady left-back willing to push forward and combine with Iniesta when given the chance. Keeps things fairly simple with so much artistry elsewhere. 7

Sergio Busquets: The least celebrated part of a glittering midfield, the 21 year-old gets through a tremendous amount of work. Not the best passer but he does like a tackle. 7

Xabi Alonso: With his metronome-like passing, he keeps things ticking along at the base of midfield before picking his moments to venture forward. Won't hesitate to shoot. 8

Andres Iniesta: A gem of a player whose understanding with Xavi verges on the telepathic. Never stops moving or thinking, he's almost impossible to pin down. 9

Xavi: Along with Iniesta, the heartbeat of the team, capable of dominating a match with his wonderful talent. Holland's destroyer, Van Bommel, will surely have plans. 9

Pedro Rodriguez: Enjoyed an outstanding time in the semi-final when his passing and dribbling bamboozled Germany. His duel with Van Bronckhorst should be fascinating. 8

David Villa: In deadly form, having scored five of his country's eight goals. Does look happier, though, coming in from the left rather than leading the line on his own. 9

Fernando Torres: Hasn't looked fit and certainly hasn't looked confident but Del Bosque might yet be tempted to play El Nino so that Villa can move across to the left. 7

Vicente Del Bosque (coach): Taken over seamlessly from Luis Aragones by maintaining the spirit within the squad. Mind you, how could he fail with this group of players? 9

Maarten Stekelenburg: In trying to fill the gloves of Edwin van der Sar, the big keeper has done very well, keeping errors to a minimum behind a well-drilled defence. 8

Gregory van der Wiel: Should return from suspension to replace Khalid Boulahrouz. Only 22 but has coped admirably after starting his career in central defence. 8

John Heitinga: An aggressive centre-half who loves a scrap, the Everton man has played every minute of this tournament so far. Played them well too. 8

Joris Mathijsen: Hugely experienced, the Hamburg defender gets the job done without any fuss. In addition, he's adapted to playing with Heitinga, a new partner for these finals. 8 Giovanni van Bronckhorst: Has never looked the grittiest of defenders, but compensates by pushing his man the other way. Packs a powerful shot, as Uruguay can confirm. 8

Mark van Bommel: Can be a nasty bit of work with some cynical challenges but the 33 year-old's vast experience will be vital tomorrow. Offers protection to a grateful defence. 8

Nigel de Jong: Another tough tackler who can verge on the reckless, the Manchester City midfielder is never far away from getting booked. 7

Arjen Robben: Holland's wild card, the one most likely to produce something out of the ordinary. Will constantly duck inside on to that killer left foot. 9

Wesley Sneijder: Superb in South Africa following a brilliant season for Inter Milan. Another goal in Johannesburg could win him the golden boot. 9

Dirk Kuyt: Typically tireless, the Liverpool workhorse is also valued for his discipline in adhering to the coach's tactics. A useful shield for Van Bronckhorst. 7

Robin van Persie: Yet to truly set this tournament alight but remains a top class centre-forward who cleverly links the play. Due a goal so this might be his time. 8

Bert van Marwijk (coach): Full marks to the coach for engendering a great team spirit when previous squads have been famously fractured. Built his success on defensive resolve. 8