(Writes through with quotes, detail) 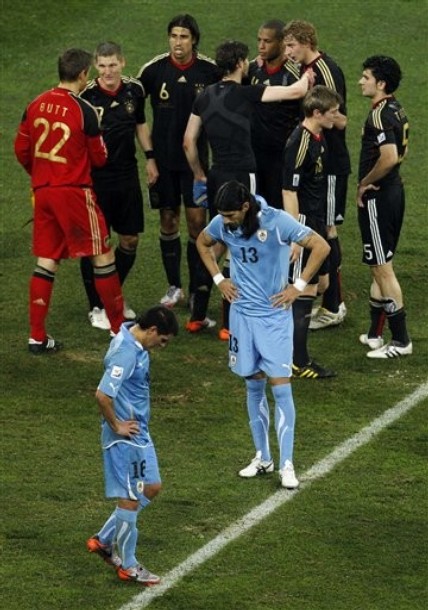 PORT ELIZABETH, July 10 (Reuters) - Germany showed their legendary resilience on Saturday when they came from behind to beat Uruguay 3-2 in a thrilling third-place World Cup playoff.

Having led early on, the Germans fell 2-1 behind early in the second half but equalised soon after and Sami Khedira headed the winner eight minutes from time.

There was still time for great chances at both ends with Diego Forlan hitting the bar with a stoppage-time free kick.

Forlan and Thomas Mueller, scorer of Germany’s opener, both finish the tournament on five goals, level with Spain’s David Villa and Wesley Sneijder of Netherlands—who can of course add to their tally in Sunday’s final.

“When we were trailing we could see the strength of this team. I’m so happy to see them turn it around,” said coach Joachim Loew, assistant to Juergen Klinsmann four years ago when Germany also finished third on home soil.

“Champions rise again, we rose to the occasion again. We have every reason to be fully satisfied, no reason for disappointment, we will travel home feeling great.”

Uruguay too deserve huge credit for their attacking approach in the match but had to settle for fourth, just as they did last time they reached the semi-finals in 1970 when they were also beaten by then-West Germany in the playoff.

“We showed our purpose and intentions, on a level playing field against a great opponent,” said coach Oscar Tavarez.

“We showed we can play any team in the world, there’s nothing above this. We lost, but we could have won.”

Saturday’s game was the sixth time in a row at this tournament that a European team beat a South American one — turning the tables completely from the six-game sequence at the start when South Americans were unbeaten against Europeans.

Miroslav Klose’s bid to find the one goal he needed to join Ronaldo at the top of the all-time scorer’s list on 15 ended when he was ruled out by flu and spent the match on the bench looking very pale alongside fellow victims Lukas Podolksi and Philipp Lahm.

Attention turned instead to the race for the tournament golden boot when Mueller scored after 19 minutes after Fernando Muslera failed to hold Bastian Schweinsteiger’s long-range shot.

Uruguay levelled after 28 minutes through Edinson Cavani after Diego Perez had robbed Schweinsteiger on the halfway line.

Uruguay continued to surge forward after the break and went ahead in the 51st minute when Forlan expertly volleyed in a cross by Egidio Arevalo, only for Marcell Jansen to rise high to head in a cross from Jerome Boateng five minutes later.

As the rain lashed down to add an extra element of drama, the game surged from box to box with Luis Suarez, booed at every touch by sections of the crowd unimpressed by his handball against Ghana, missing several good chances and substitute Stefan Kiessling blasting over a sitter for the Germans.

Just as extra time looked likely, Germany struck again as a Mesut Ozil corner bounced around in the six yard box before Khedira nodded it in.

There was still time for Uruguay to launch a series of attacks and with the very last kick of the match Forlan curved in a superb free kick only to sink to his knees in disbelief as it crashed against the bar and out to safety.

“It just missed by a fraction,” said the striker who has been one of the players of the tournament not just for his goals but also his approach work and boundless energy.

“I’m pretty tired but it’s over now and it’s time to rest.”

Uruguay, so close to elimination by Ghana in the quarter-finals, will go home to a heroes’ welcome after their best performance for 40 years and though German fans are more used to their team reaching finals, they too will no doubt appreciate the efforts of their young team who handed both England and Argentina four-goal thrashings.

“We’ve done well here,” said Khedira. “But next time we want to get to the next level.”