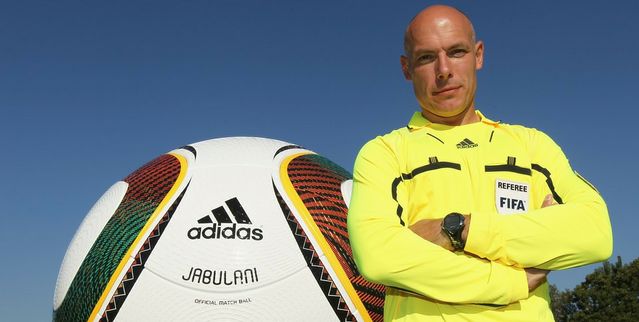 Howard Webb insists he has the courage to make the big decisions in tomorrow's World Cup final - even if it means emulating Jack Taylor and awarding a penalty in the first minute.

Webb, supported by his assistants Darren Cann and Michael Mullarkey, will become the first English referee of a World Cup final since Taylor in 1974 and said it was the "ultimate honour" to be chosen by FIFA for the Spain vs Holland encounter.

Taylor made World Cup history by awarding Holland a spot-kick just one minute into the game - the first-ever penalty in a final - and then awarded one to eventual victors West Germany 20 minutes later.

Webb and his assistants spoke to reporters on the playing fields of a high school in Pretoria after their last training session before the final, and said the match marked the culmination of years of hard work.

The 38-year-old former police sergeant said all three would not flinch from making the kind of tough calls that Taylor did 36 years ago.

Webb said: "Jack Taylor is something of a refereeing legend.

"He's someone I've got to know fairly well and he has been a big supporter for me especially earlier on in my career.

"We have spoken about his career and he tells some wonderful tales and of course he took a big decision in the first minute of the 1974 final.

"I hope that once the final is over people will not be speaking about the match officials but if big decisions have to be made we will step up to the plate."

The English trio will become the first to have refereed a Champions League final and World Cup final in the same year, and Webb knows tomorrow will be the biggest match of his life.

He added: "We are delighted to have been selected for the game, it is a wonderful honour and a privilege. It is the ultimate honour for a referee.

"We are proud to be representing the English FA as well as FIFA and all the other officials here at the World Cup.

"We will be proud to be able to show the ability and quality of match officials in England when we take to the field tomorrow evening.

"This is the World Cup, and it's massively important for the world. We understand the importance of the game and we will need total focus and concentration.

"We will try to be a calming influence where we can and use all our experience of being involved in big games."

The fathers of Webb, from Rotherham, Cann, from Norfolk, and Mullarkey, from Exeter, will be at the Soccer City stadium tomorrow to watch the game. The trio of dads, all former refs, also attended the three matches refereed by their sons at the World Cup so far.

Mullarkey, who used to work in insurance before becoming a full-time match official, said all three officials were close to tears when they were told they had been chosen for the final.

He said: "We had not been chosen for any of the quarter-finals or the semi-finals so you do start to wonder about things.

"When we were actually told it was an incredible moment. When I was sitting at home watching the 2006 World Cup on television I never envisaged that I would be here doing the final.

Cann, a former bank manager, added: "This is the culmination of 20 years' hard work and is the greatest honour we can receive as match officials.

"It was a very emotional moment in truth when we were told. When match number 64 was read out and the name Webb that was what we were waiting for. Everything became a blur for a few seconds and neither Mike nor I can remember hearing our names read out afterwards."