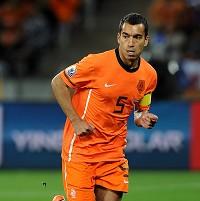 There will be no old pals act from Giovanni van Bronckhorst on Sunday as he looks to end his career in spectacular style by lifting the World Cup.

Holland's encounter with Spain means a reunion with a number of familiar faces for the Dutch skipper who, during his four years at Barcelona, got to know Xavi, Andres Iniesta and Carles Puyol.

The 35-year-old remained in contact after he quit the Nou Camp in 2007, but the texts have been silenced as with a World Cup to win, and he said: "My boyhood dream is something more important so they will have to make do with a silver medal this time."