It's a battle to finish third in the World Cup..... 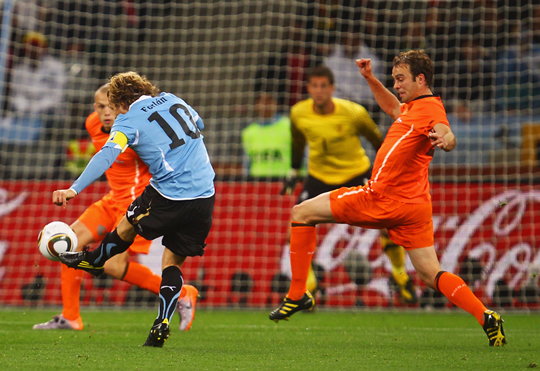 Finishing With A Flourish

Uruguay didn't exactly have a very difficult path to the semi-finals of the World Cup but that shouldn't detract from their truly adventurous journey. The South Americans featured in the last four of a World Cup for the first time in 40 years and indeed gave the Netherlands a run for their money, narrowly losing 3-2.

Moreover, the  Celeste could point out that the Oranje's first two goals were controversial: Mark Van Bommel had commited a foul in the build-up to Giovanni Van Bronckhorst's wonder strike while Robin Van Persie was offside for Wesley Sneijder's goal.

Nevertheless, Uruguay shouldn't be too depressed as their team were arguably the most 'romantic' in the competition and for a nation with just 3.5 million inhabitants, reaching the semi-finals ahead of Argentina and Brazil was indeed an achievement in itself. On other occasions finishing third in the World Cup wouldn't mean much but the honour of being officially the third best team in the finals is a massive incentive to play well and win on Saturday night.

Germany must be feeling sore after crashing out of the World Cup on Wednesday evening. Die Mannschaft were easily the best and most attractive team in South Africa, having dispatched England and Argentina in the last two rounds with ease, but against European champions Spain in the semis they met their match.

La Furia Roja taught the Euro 2008 finalists a footballing lesson, winning 1-0 to reach the final of a World Cup for the first time in their history as the Germans failed to show their true colours. Of course, the margin of defeat means that Joachim Loew's side can go out with heads held high, but they will certainly be looking to make up for that defeat with a win on Saturday evening.

Four years back Germany finished third in the 2006 World Cup finals they themselves hosted by defeating Portugal in the third place play-off. The current Germany team is a very young one but they have shown lots of potential to scale the heights. Indeed, a win against Uruguay that will enable them to finish third for the second World Cup in a row - this will be a great achievement indeed.

The game could also be a special occasion for striker Miroslav Klose. The 32-year-old has a total of 14 goals in the World Cup finals, just one short of Brazilian legend Ronaldo's all-time record of 15. He is struggling for fitness but the Bayern Munich forward will be desperate to start against Uruguay to equal or even beat Ronaldo's record. 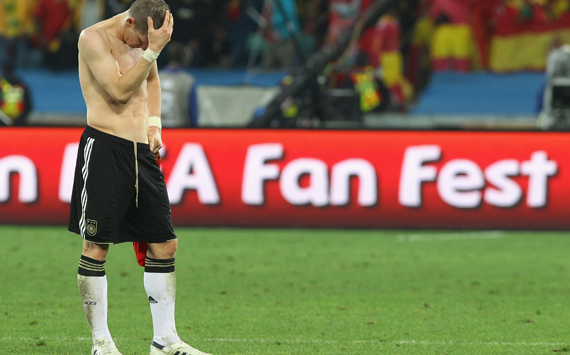 Midfielder Walter Gargano is set to miss out but striker Luis Suarez will be back from suspension. However, star man Diego Forlan picked up an injury against the Netherlands and there are some doubts on his fitness. Centre-back Diego Lugano will start in defence, meaning that Diego Godin will be on the bench.

Striker Miroslav Klose picked up a back injury in Germany's defeat to Spain and there are suggestions that he won't be able to start against Uruguay. Assistant coach Hansi Flick also hinted that midfielders Sami Khedira and Mesut Oezil too have problems. Marcell Jansen is also likely to start at left-back ahead of Jerome Boateng. Thomas Mueller will be back from suspension and will replace Piotr Trochowski in midfield.