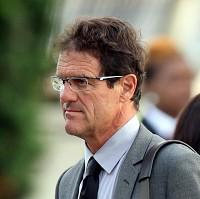 Capello's future in the role was in doubt following England's woeful World Cup campaign which saw the Three Lions beaten 4-1 by Germany in the first knockout round in South Africa. But the FA have since announced the former AC Milan and Real Madrid boss will stay on, a move endorsed by his fellow Italian Mancini.

"In my opinion England have the best national coach possible. He (Capello) is creating the basis for a solid team. The problem is not that, but another one," he said, referring to the busy Barclays Premier League campaign. "In England you play too much."