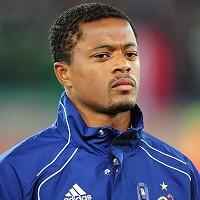 Marcel Desailly has called for France captain Patrice Evra to be suspended for at least two months for his part in Les Bleus' controversial World Cup campaign.

France crashed out in the group stage amid huge unrest in the camp, with Nicolas Anelka and coach Raymond Domenech involved in a bust-up which resulted in the Chelsea striker being sent home. A subsequent strike by the players in protest added to the air of farce surrounding France's doomed campaign.

Desailly believes Manchester United defender Evra should be held accountable and he told French newspaper Metro: "The Federation president and the coach have already paid the price. And I think that Evra, who is the origin of the strike, should pay too."