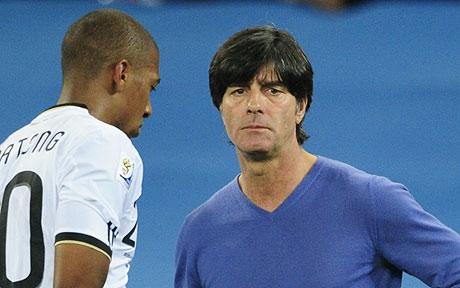 Gracious: Germany coach Joachim Low conceded Spain were better than his side in the World Cup semi final.

A second-half header from Carles Puyol secured Spain's 1-0 win over Germany in the semi-finals of the World Cup to set up Sunday's match against Holland at Soccer City in Johannesburg.

"I am sure the Spanish can win any game because they are dominant and it's hard to contain their attack," Low said. "They have shown they can beat anyone.

"In the last two or three years, they've shown themselves to be one of the best and most united teams. They circulate the ball well and we weren't able to play the way we like to play."

Low lamented that his team had surrendered possession too much in midfield at Moses Mabhida Stadium, saying his players had been unable to spring from defense into attack as efficiently as in recent matches at the World Cup.

He said his team should not have allowed Puyol to head the winning goal from a corner.

"We should have intercepted that ball," Low said.

The win means Germany's wait to win their first World Cup since their triumph at Italia 90 goes on, while Spain contest their first ever World Cup final, just two years after becoming European champions.