Five planeloads of football fans headed for the World Cup semi-final between Spain and Germany suffered severe delays on Wednesday at Durban's King Shaka international airport, forcing some to miss the match. 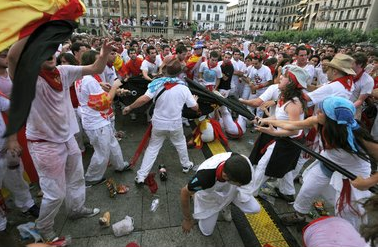 Four planes from Johannesburg and one from Cape Town thought to be carrying around 400 passengers in total were delayed after the airport was swamped by arrivals, airport operations director Bongani Maseko told The Associated Press.

He said the problem was caused by the large numbers of supporters arriving at the airport for the World Cup semi-final.

All five planes were eventually allowed to land and the passengers given a police escort to the stadium, though too late for many fans to see Spain's 1-0 victory.

Maseko apologized to supporters who missed the game.

Delays caused by weather earlier in the day had been compounded by the high number of aircraft trying to land, Maseko said.

"It means a lot to me that there were fans who might have flown from Germany or Spain with a World Cup ticket," he said. "We are very mindful of that. Some fans certainly missed at least the start of the match. If you look at the numbers in the stadium it's not a lot, but we would like to apologise for any inconvenience."

The planes that were delayed were all described by Maseko as Boeing 737-size aircraft, which carry a maximum of 150 passengers when full.