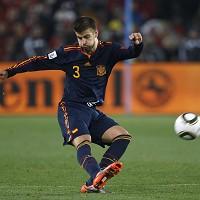 Gerard Pique has told Germany there are "no favourites" when the World Cup reaches the semi-final stage.

The Spanish defender has been impressed with Germany's form on the way to the last four in defeating England 4-1 and then Argentina 4-0 in back-to-back games. But former Manchester United man Pique believes the European champions' never-say-die attitude could be crucial.

Pique, who now plays for Barcelona, said: "I feel so happy for the team and the country. It is the first time we are in the semi-finals and it is great to make history."