Home - News
Uruguay vs Netherlands Match Preview
05/07/2010  by livesoccertv.com
Text size: A A A 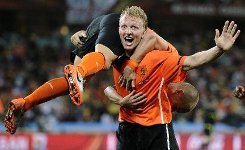 A few months ago, no one would have expected Netherlands and Uruguay facing each other at the semi finals.

Both teams, undefeated, will have to fight for a place in the final. Uruguay's martyr Luis Suarez -the player most familiar with Dutch football in the squad- will be unable to perform, while Netherlands will have to do without De Jong and Van der Wiel, Will Oscar Tabarez's squad be able to defeat Brazil's executioners without his Lion?

Writing history
Uruguay has made it once again to the latter stages of a World Championship, but the players are not satisfied with the goal reached. "To write history is to lift the cup" were Uruguay's captain Diego Lugano's words when asked about the performance of the Celeste. Uruguay only took on Netherlands once in a world cup, back in 1974 when the Oranges won 2-0.

Uruguay will have an Herculean task ahead, as it looked like Maestro Tabarez had found the perfect scheme to face any rival in South Africa after the first draw with France, but for this decisive match he'll be lacking three decisive players: Jorge Fucile was cautioned against Ghana -having already received a yellow card before, joining Luis Suarez in the list of Celeste's players with disciplinary problems. As if this was not enough, Uruguay's captain Diego Lugano might not be fully recovered of the strong impact on his right leg in the last match.

Mauricio Victorino will must surely occupy Fucile's place, though this will give Tabarez's team less presence to overwhelm from the wings. Suarez's replacement poses a totally different problem: It wouldn't be wise for Uruguay to have Forlan occupy the role of main play maker, as the Celeste won't be having a heavy weight striker to take better advantage of that strategy. Edinson Cavani will most surely be the second striker; Will Uruguay's coach prefer to modify his strategy to have more presence in the midfield or will Sebastian Abreu take over Suarez's place?

Young Nicolas Lodeiro, on the other hand, will most surely miss this game as his right foot will probably sideline him for the rest of the Cup, after experiencing intense pain against Ghana. Tabarez misses another creative player with this absence. At least Diego Godin appears to be ready to join Uruguay's back line, recovered from a muscular fatigue.