Brazil coach Dunga has been dismissed after his side's quarter-final exit from the World Cup, the Brazilian Football Federation have announced. 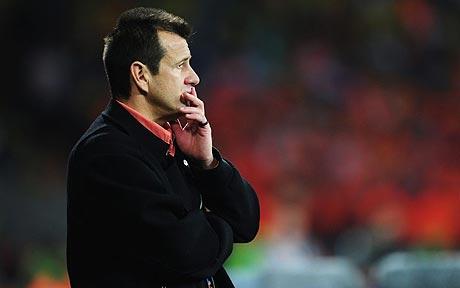 End of the road: Brazil coach Dunga has been dismissed after his side were eliminated by Holland in the quarter-finals

The decision was widely expected after Brazil's surprise 2-1 defeat to Holland in Port Elizabeth on Friday. Robinho's goal had given Brazil an early lead against the Dutch, but two second-half goals from Wesley Sneijder saw them crash out in the quarter-finals for the second World Cup in succession.

"With the closing of the work cycle that started in August 2006 and ended with the elimination of Brazil from the World Cup in South Africa, the CBF announces the dismissal of the Technical Commission of the Brazilian team," the Brazilian Football Federation said in a statement.

The federation added that a new coach would be appointed before the end of the month.

Mano Menezes, former Brazil player and AC Milan coach Leonardo, and Wanderley Luxemburgo have all been tipped by the Brazilian media as potential successors to Dunga.

Luiz Felipe Scolari, who coached Brazil to its fifth World Cup title in 2002, had previously been expected to return but has since distanced himself from the role, citing his commitments with Brazilian club Palmeiras.

The new coach and his staff are likely to face several friendly matches in the coming months, before heading off to Argentina for the Copa America in the summer of 2011.