Nigeria's football federation have apologised for the national team's poor World Cup performance in a last-ditch bid to avoid a Fifa suspension. 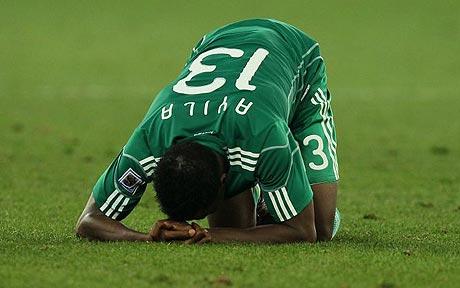 Troubling times: After a disappointing World Cup, things have not got any easier for Nigeria since returning from South Africa

NFF President Goodluck Jonathan imposed the suspension last week following Nigeria's poor performance at the World Cup, where they were knocked out in the first round after failing to win a game.

Fifa gave Nigeria until Monday evening to reverse its decision and escape being barred from all Fifa-related activities.

On Friday, a Nigerian presidency source said the suspension would remain despite Fifa's threats.

However, a communique from an emergency Nff executive committee meeting on Saturday said: "We wish to passionately appeal to the president to reconsider the earlier decision."

Two of the federation's leading figures have also been dismissed, while the committee also offered an "unreserved apology" to Nigeria's 140 million citizens for the national team's failures.

"The leadership of the present Nff executive committee should be held responsible for the current crisis in Nigerian football," the committee said.

If the Nigerian government fails to heed Fifa's ultimatum, it risks being cut off from all Fifa activities, including junior and female competitions, and also losing the country's Fifa funding.

A ban would also restrict access to Fifa's development courses and stop the annual payment each member association receives – cash that is vital for the growth of Nigerian football.