Holland booked a World Cup quarter-final spot after a narrow 2-1 victory over Slovakia in Durban. 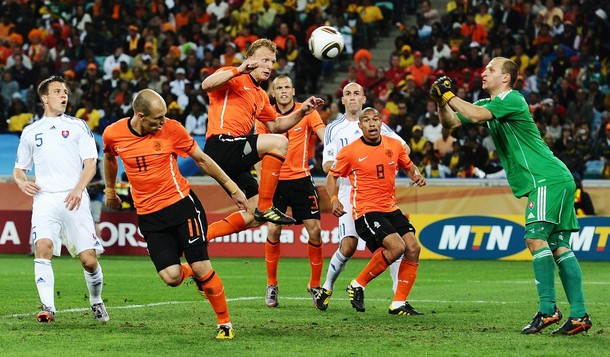 Arjen Robben opened the scoring in the 18th minute before Wesley Sneijder doubled his team's lead with six minutes remaining.

Slovakia scored a consolation goal in stoppage time when Robert Vittek struck from the penalty spot after substitute Martin Jakubko was brought down by Holland goalkeeper Maarten Stekelenburg.

Stekelenburg had earlier made a great save from Vittek's close-range strike in the 66th minute to deny Slovakia an equaliser.

Holland have now won all four games at the World Cup and will meet the winner of Brazil's clash with Chile on Friday in Port Elizabeth.

Robben earned his first start at the World Cup after recovering from a calf injury and he terrorised Slovakia's defence with pace and skill before being replaced after the hour mark.

Slovakia coach Vladimir Weiss made just one change to the side that knocked Italy out of the tournament.

The Slovaks, looking to upset another World Cup heavyweight, started in confident fashion and had the first chance after two minutes but Erik Jendrisek's left-footed strike from 25 yards went over the bar.

Holland struggled to break down Slovakia's defence and were limited to long-range shooting.

Sneijder tried his luck from distance and his effort went high and wide while shortly after, Dirk Kuyt fired just wide of the near post.

In the 10th minute, Sneijder should have done better after being set up inside the area by Van Persie.

It did not take long for Holland to go in front, though. A great long ball from Sneijder found Robben and the Bayern Munich winger cut inside two defenders before firing a left-footed strike into the net.

On the half-hour mark, Miroslav Stoch got the ball into the danger zone but no-one was there to get on the end of his cross.

Holland were happy to sit on their lead with Slovakia unable to put a good move together.

Slovakia showed more determination after the restart but it was Holland that looked more deadly.

Mucha was twice called into action to prevent Holland from extending their lead.

The Slovakia goalkeeper was forced to fully stretch to make a one-handed save from Robben's shot and, seconds later, Mark van Bommel's close-range shot was parried away by Mucha.

Stekelenburg made his first save of the afternoon in the 65th minute by palming over Stoch's right-footed strike from the edge of the area.

Slovakia should have equalised seconds later but Vittek's effort was parried away by Stekelenburg.

At the other end, Kuyt latched onto Sneijder's free-kick but his header went over the bar.

In the 73rd minute, Kuyt warmed the hands of Mucha with a stinging drive from 25 yards and Holland ended Slovakia's hopes in the 84th minute.

Kuyt fed Sneijder and he struck the ball home from 15 yards.

With seconds remaining, Vittek coolly scored from the penalty spot to score his fourth goal of the World Cup, but it was too little, too late.