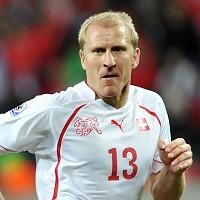 Switzerland defender Stephane Grichting was left deflated after his side were knocked out of the World Cup.

Needing to win by two goals to progress to the last 16, they had to settle for a 0-0 draw against Honduras in Group H at the Free State Stadium.

He said: "We ran and we tried to do everything to score but it wasn't enough. When you only score one goal in three matches, you don't go through. We had everything in our hands - we had to win by two goals. That's what we tried to do, but we weren't able to do it."