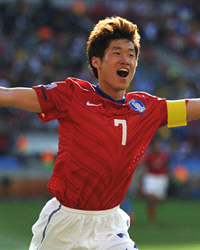 Park Ji-Sung, the captain of South Korea, has called on him team-mates to emulate the class of 2002 and reach the semi-finals of the World Cup.

Eight years ago, playing on homesoil and led by Guus Hiddink, the Koreans shocked both Spain and Italy as they reached the final four, only to be narrowly defeated by Germany 1-0.

And the Manchester United midfielder is looking for his side to emulate their best ever World Cup performance in South Africa.

"We ourselves don't have a clear conviction of how far we can go," he told reporters.

"But in 2002, we made it to the semi-finals and I don't think that was just because it was on home ground.

"We will do our best to prove that was not the case."

Furthermore, the Koreans will be bouyed by a draw which has been quite kind to them, in their possible run to the semi-finals.

Should they be able to get past an in-form Uruguay in the last 16, they'll avoid the likes of Brazil and Holland, and would meet either Ghana or the United States.

However, Park doesn't believe that you can compare the current team to the 2002 vintage just yet.

"I can't compare this team to the 2002 team. That was the best team in our history," he continued.

"But this 2010 team is improving and we have got through the first round of games.

"Shortly, at the end of the World Cup, we are going to compare the previous team with this one and hopefully then we can say we are better."