The Italian press were quick to shower their national team with criticism after the defending champions fell at the first hurdle finishing bottom of Group F in a spineless defence of their World Cup crown. 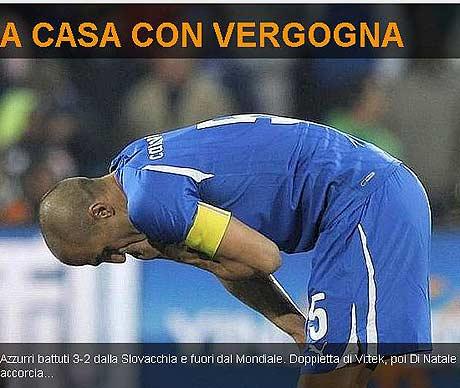 Italy managed to accumulate just two points from their three group games after recording successive draws against Paraguay and New Zealand before crashing out of the tournament thanks to a 3-2 defeat to World Cup debutants Slovakia.

The Azzurri faithful are not used to seeing their side fail having notched up four World Cup wins and the embarrassment suffered in South Africa was felt just as hard back on Italian shores with the press leading the backlash.

Italy were tipped to make light work of Group F but struggled to recreate the magic of 2006 and fought uphill battle after uphill battle having conceded first in all three games.

La Republica wrote that "it's worse than with Korea," in reference to the shock exit at the hands of North Korea at the group stage in 1966, one of only two previous first round exits.

Thousands of Italian fans had gathered on the streets of Milan in eager anticipation with qualification a realistic prospect but much to their horror they soon became witnesses to the unravelling of a disastrous World Cup campaign. By full time the same streets had been left deserted.

But it wasn't just the Italian press alone that provided the ammunition in a verbal assault on the team's performance with a host of players weighing in with some harsh words of their own.

Veteran midfielder Gennaro Gattuso was part of the all conquering side that lifted the Jules Rimet trophy in Germany four years ago but was frank in his assessment of a disastrous showing this time around.

The return of Andrea Pirlo, who had sat out of the first two games with a calf injury, in the latter stages against Slovakia failed to salvage a desperate situation and the midfielder could only echo the words of his team-mate.

"It's shameful to have not got out of a group like this, we could have done much better," he said.

"We didn't win a single match, that's a huge disappointment. Everyone's at fault.

"I think this is the end of a cycle because for many of us it will be difficult to play in another World Cup."