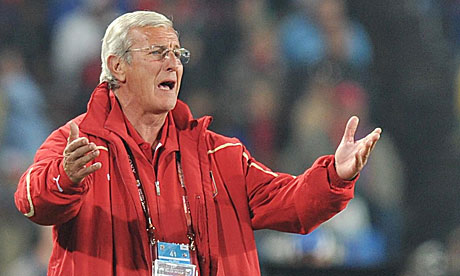 Italy's coach, Marcello Lippi, apologised last night for selecting an Italian team "with terror in its heart" and accepted full responsibility for the world champions' humiliating early exit from the World Cup.

The World Cup holders crashed out of the tournament today in the most dramatic game South Africa has witnessed so far, losing 3-2 to the first-time finalists Slovakia who progressed to the knockout phase at Italy's expense.

The biggest shock of the competition to date means that both the 2006 finalists, France and Italy, have failed to survive the group stage. If the French fell out among themselves, Italy simply failed to turn up, leaving their departing coach, Marcelo Lippi, perplexed by three abject performances yet willing to accept all of the blame.

"I take full responsibility," Lippi said. "If I was part of the success in 2006, I have to take the blame for this failure too. If a team shows up at an important game with terror in its heart and head and legs, it must mean the coach did not train them as he should have done. I thought the men I chose would have been able to deliver something different but obviously I was wrong.

"The players didn't play right, they didn't press, they didn't build, they didn't do anything. I still have belief in the players but no one would believe that was the real Italian team, the one you saw out there. I don't want to play the victim but the leader is always responsible. I refuse to believe we are as bad as you saw tonight – I didn't think we would win the World Cup but I thought we could perform better than that – but this is clearly not a fantastic moment for Italian football.

"I deeply regret not being able to prepare the team properly or find the right mix of motivation. I don't know why we only played in the last 10 minutes and I am sorry for the choices I made, what else can I say? I am extremely sorry for all the fans who came to watch us, and I can hardly express how sorry I am to end my time with the association in this way. I really would have expected anything but this."

The Slovakian coach, Vladimir Weiss, predictably struck a happier note. "The better team won," he said, not unfairly. "I am very proud of my players, we are a new World Cup country and we played at the very highest level for 80 minutes. We were under pressure after the defeat to Paraguay and I was a worried man two days ago but today we are all happy people.

"Everyone was excellent and we played like a team. I would like to say thank you to all my players and all the fans who followed us to South Africa, and I would also like to say hello to my wife, because I love her."